Adirondack chairs are finished, along with a bunch of other projects. I’ve been quiet on the posting front since summer, but still completing my goals. Let’s round-up all the great stuff coming out of the woodshop lately.

Roughly 18 months after starting the Adirondack Chair project, I finished up both chairs August 9th. Ended up doing 8 coats of finish, using a CPES product to seal the wood against the elements and then numerous coats of Epiphanes glossy and then matte to build up a durable film finish. 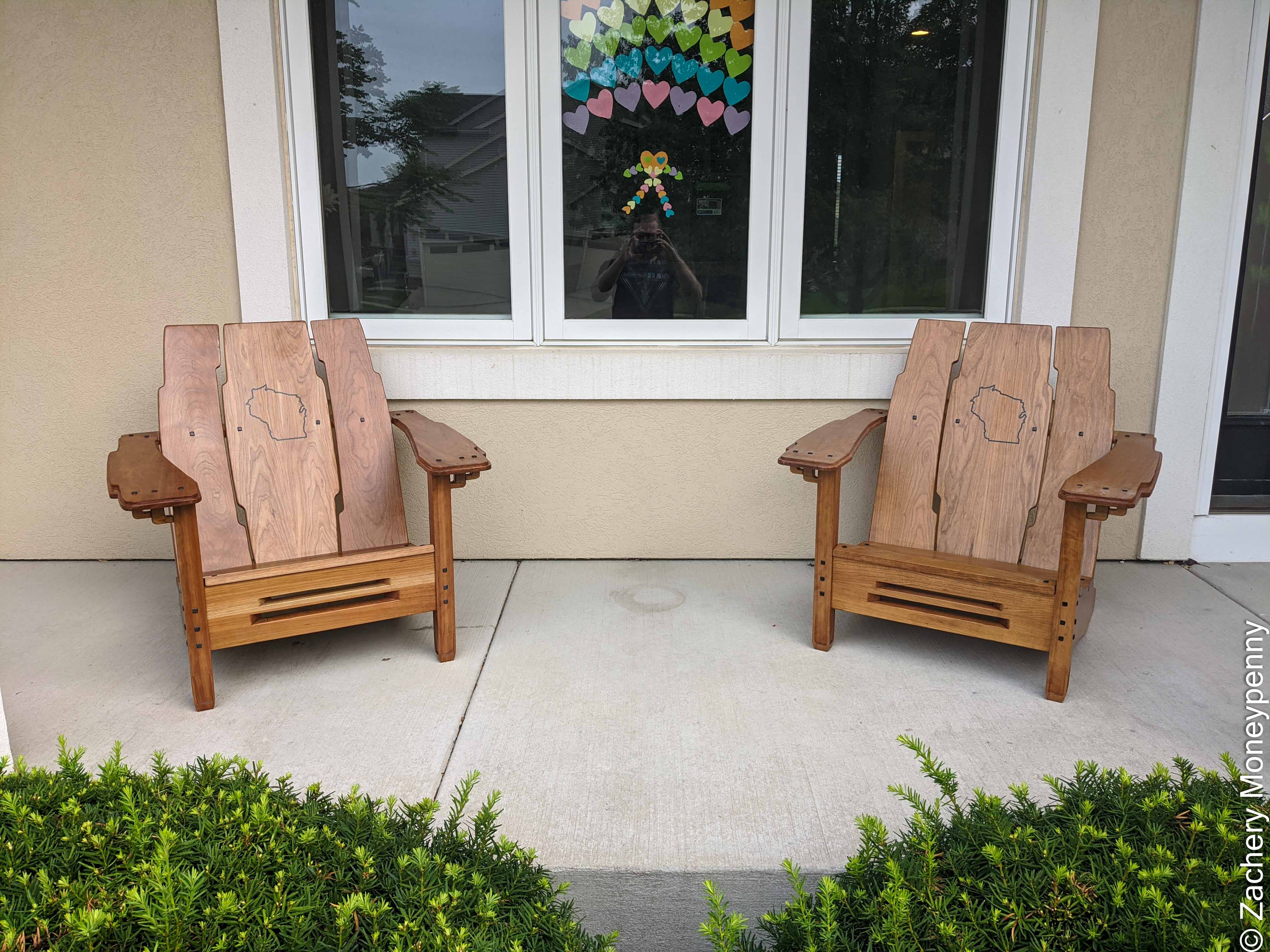 Both chairs in their final placement on the front porch

As the summer drew to a close, it felt so good to be able to sit out on the front porch and drink coffee or read a book. Unfortunately, those chairs look awfuly lonely out there with that big space in-between them. I reckon they need a table to go there- perhaps an idea for next summer.

I also took a great big chance in using the Shaper Origin to inlay the epoxy Wisconsin outline into the backs, but I’m incredibly pleased with the result. It adds a customized look that makes them one-of-a-kind.

One of the reasons I was allowed to purchase the Shaper Origin is because I had an idea to do something along with my wife for my mother-in-law’s 70th birthday in July. My wife wanted to make a poster idea she’d seen on Pinterest, something similar to… 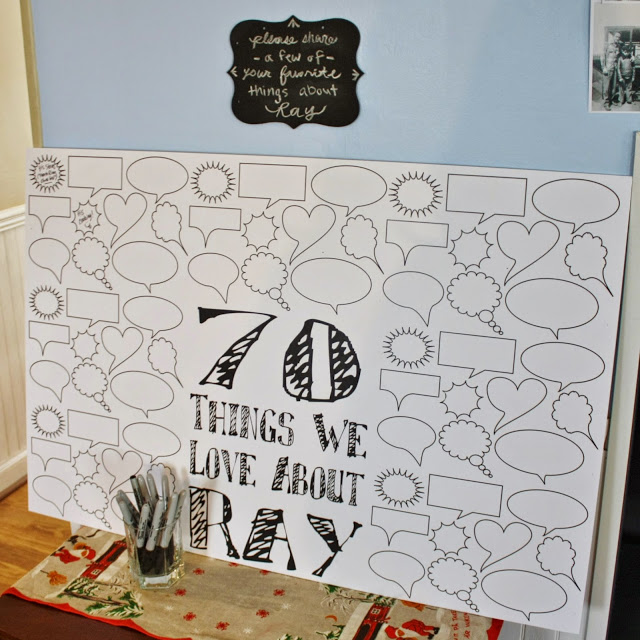 An inspiration for the birthday gift, courtesy of Google

The idea was to take that concept and make it a little more… permanent. My idea was to cut out pieces of basswood in the shape of speech bubbles, and then inlay them into a walnut plywood “canvas”. My wife would solicit messages from family and friends and write them onto the bubbles, then we’d affix them and seal the whole thing with polyurethane. 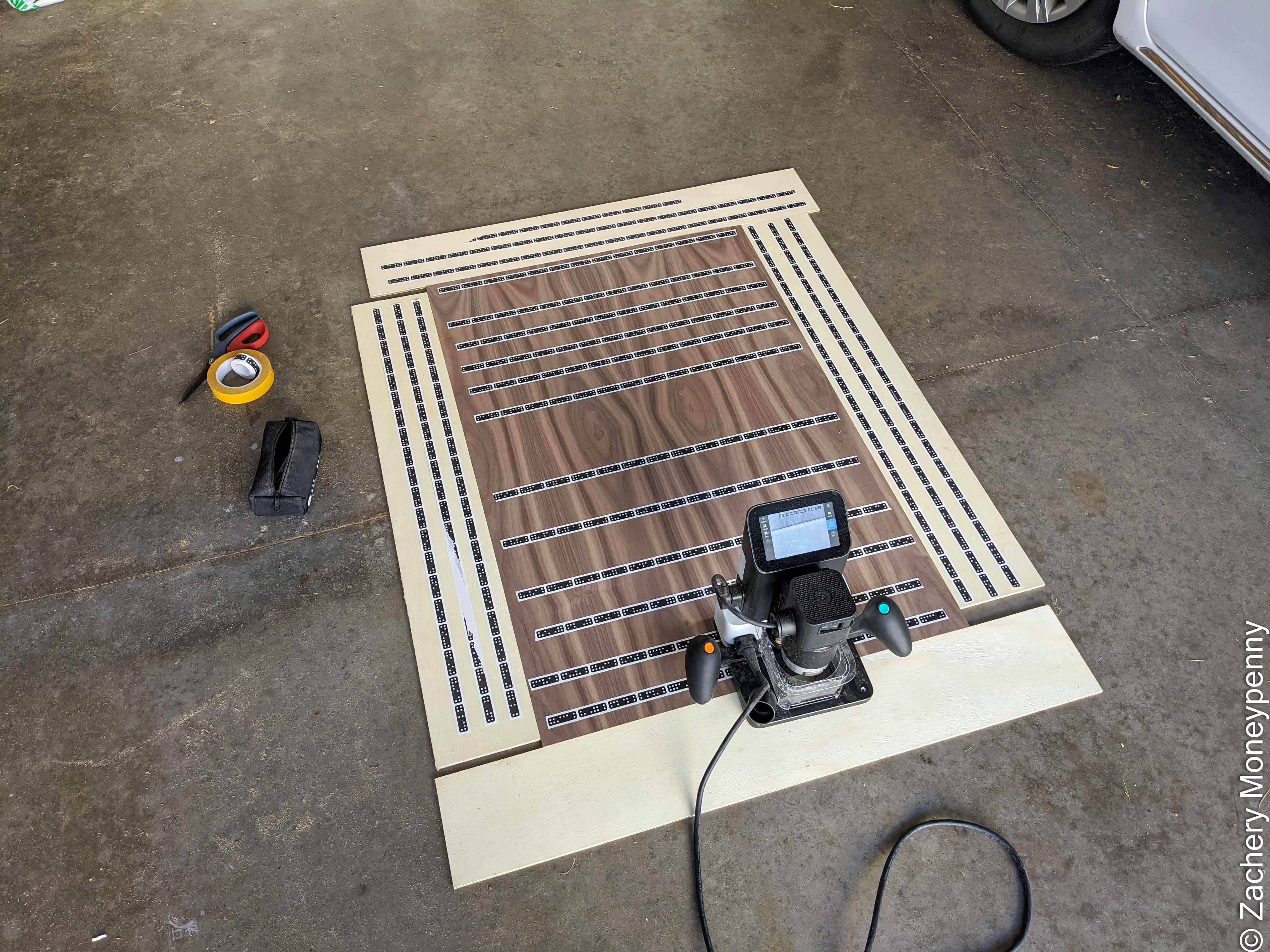 The floor-sized jig to route such a large piece

The setup was considerable, and it ended up taking two days just to cut the pieces. For the large backing board I had to lay flat on my stomach on the garage floor for hours. This is one area where the Shaper Origin made it possible to make something truly unique and neat, but I would have much prefered to be able to load the plywood into a real CNC bed and not cramp my lower back for hours and hours. 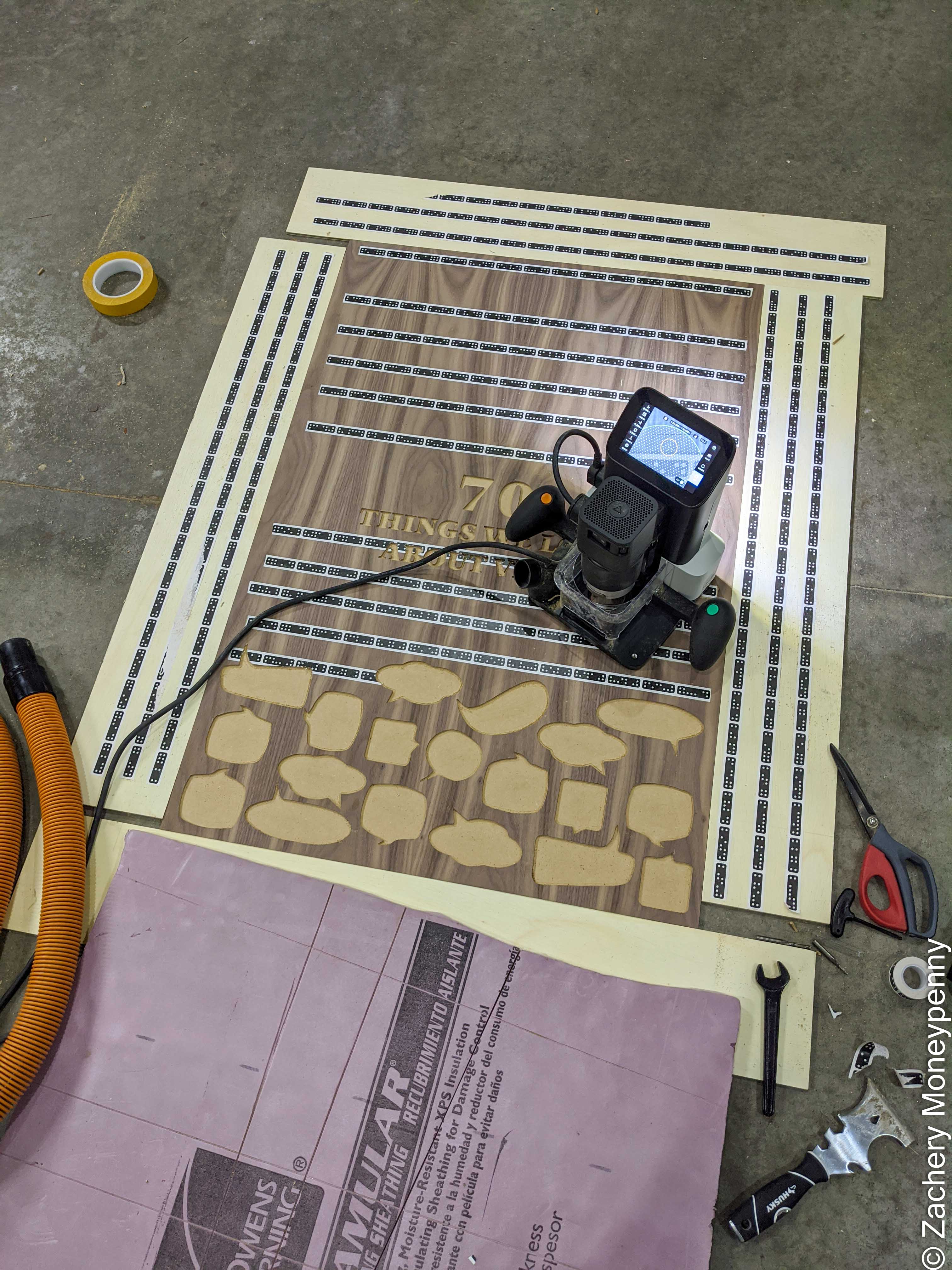 Stacy did an incredible job putting paint pen to the individual bubbles to make the sincere messages of love and support pop. Once finished the look was incredible, and it was a delight to see my mother-in-law preesented with the gift over Zoom. 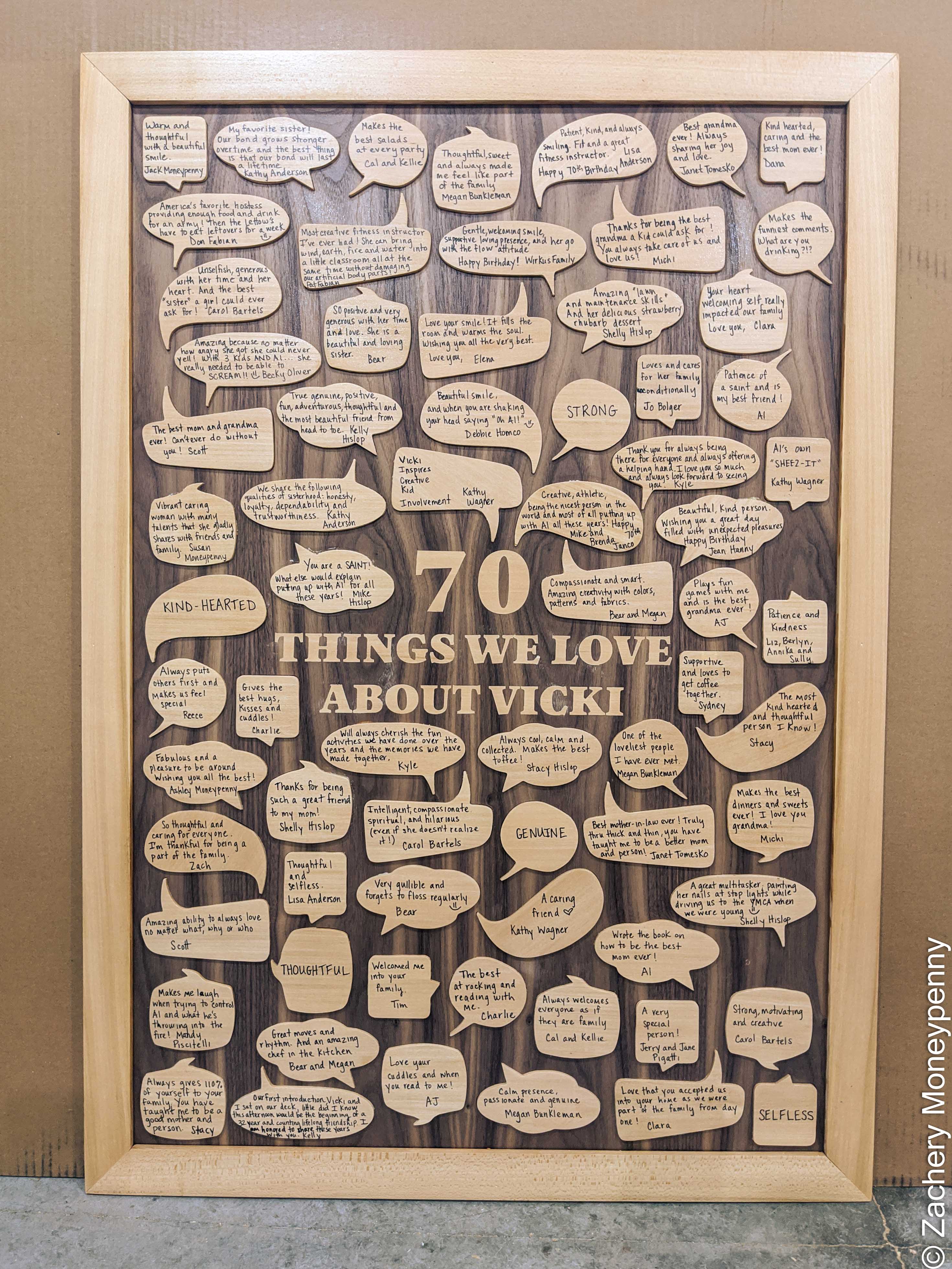 The final result, just before presentation

My neighbors and I played a lot of golf this summer, and I was urged by the neighborhood to create a yard game we could play at cookouts and such. I took some inspiration from the Chippo game and whipped up a quick board so we could set it up in driveways and play. 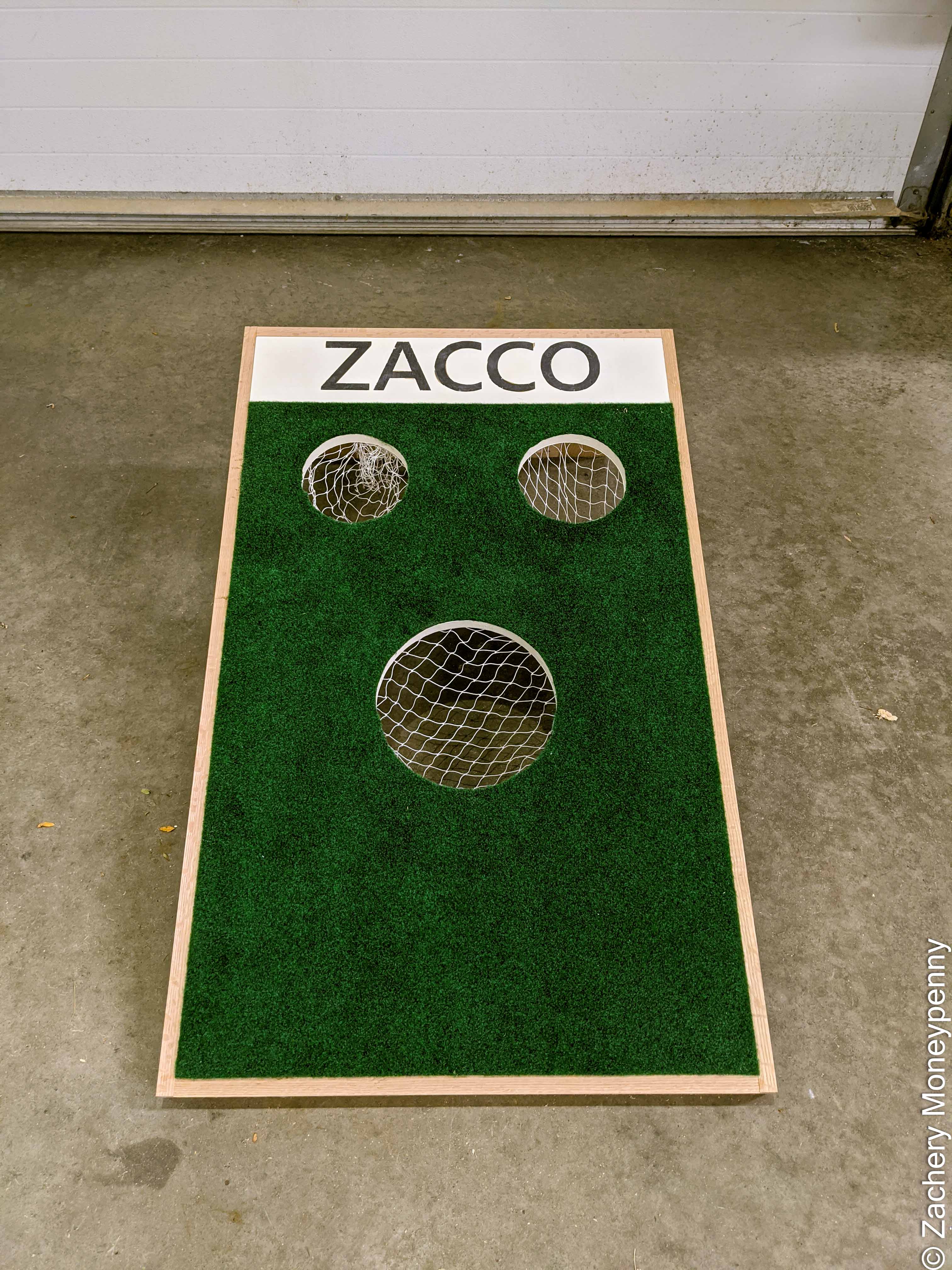 The completed Zacco game board

I bought a little hitting mat and a dozen foam golf balls from Amazon and we were off and running!

Peloton is quite a popular thing in our neighborhood as well; many folks have one and we’re actually looking forward to the delivery of ours in February.

One neighbor wanted a board with hooks and a shelf to hang near their bike, so they could hang shoes and towels on it. I came into some nice white oak from a neighbor re-doing the windows in their house this sumnmer, so I had materials on hand. One weekend later and I presented them with a nice gift. 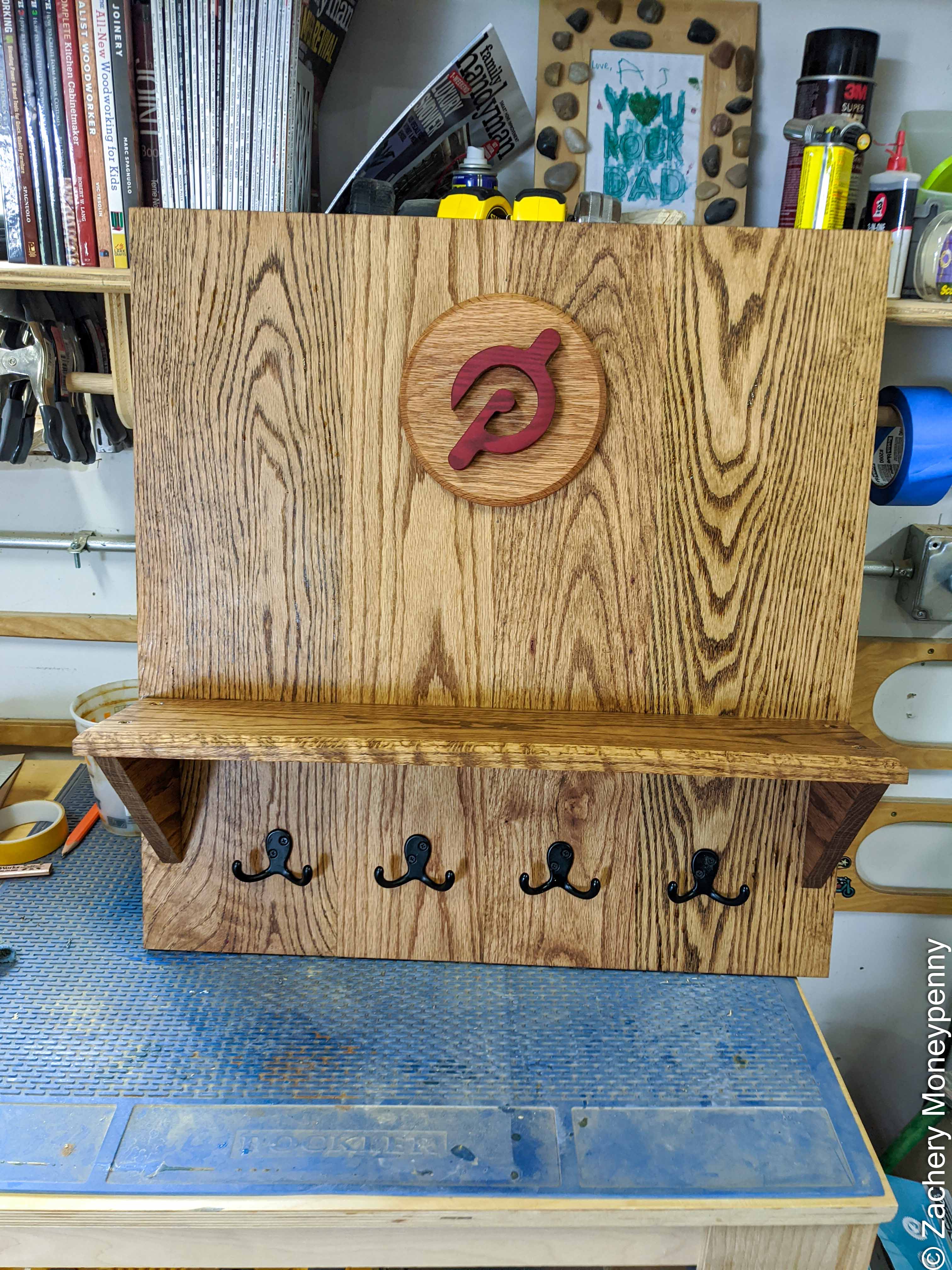 Includes a Peloton logo courtesy of the Shaper Origin

Again and again, I’m amazed at the fantastic accents I can add to a piece using the Shaper Origin. I was afraid when I bought it that I wouldn’t use it enough to justify the price tag but whether small or large I always find ways it can enhance a project.

This one isn’t finished yet, and I’ll follow up with another post once it is complete, but my wife wanted decorations for the front yard inspired by some ideas she’d seen on Pinterest. 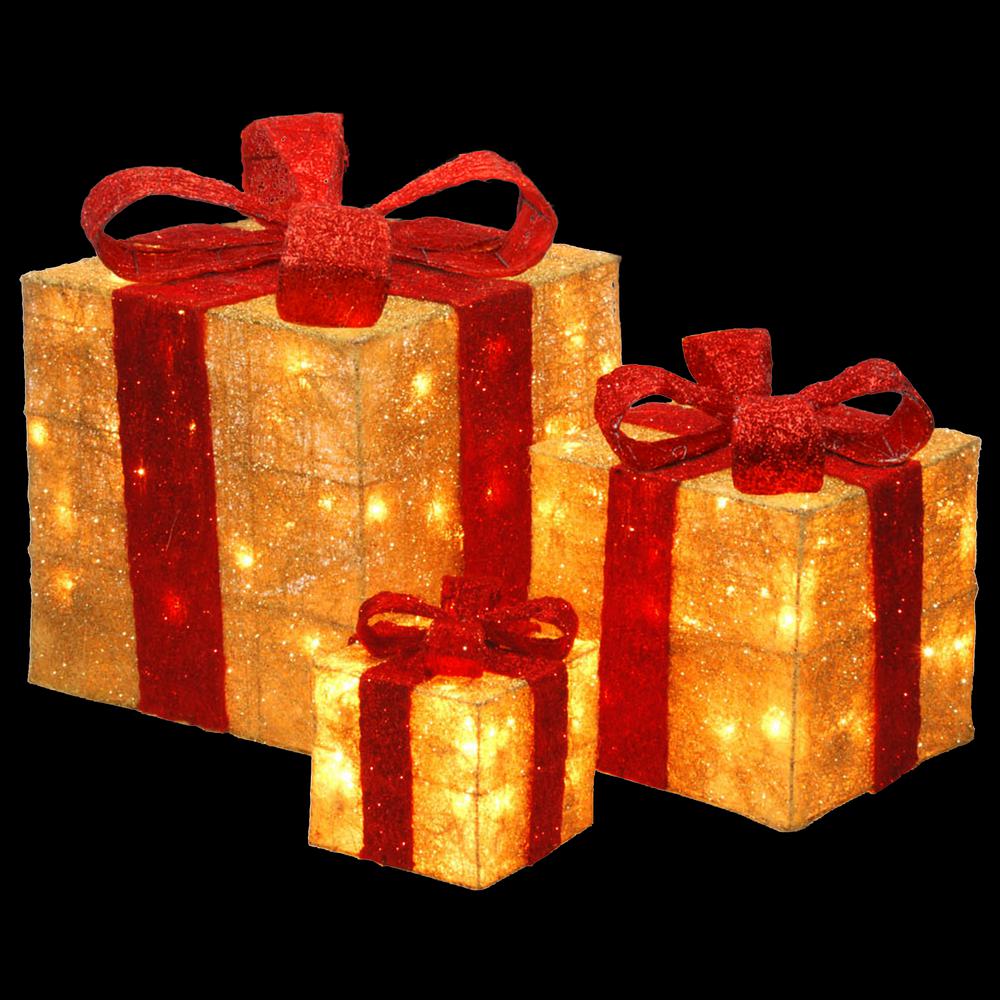 The inspiration, as taken from Google

Doing 3-way corner joinery was the only challenging part of the build, and again the Shaper Origin was instrumental in easing the work to cut relief mortises in the ends of the wooden edges so that I could lay down each corner. 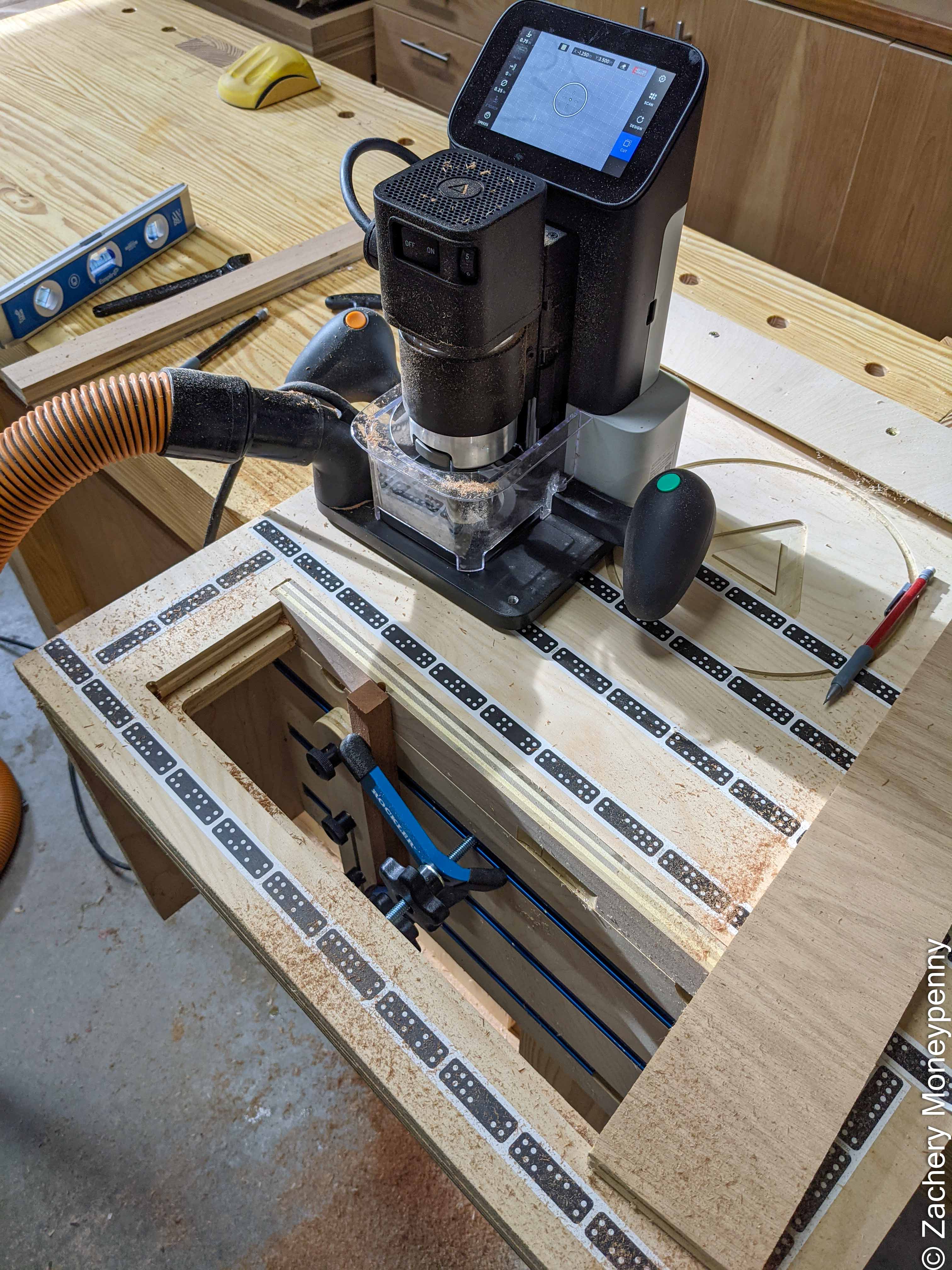 Using the Shaper Origin with the vertical workstation I built

They came out very clean, and the other mating parts of the joints were easily cut with the table saw and my dado stack configured for a 1/4” width. 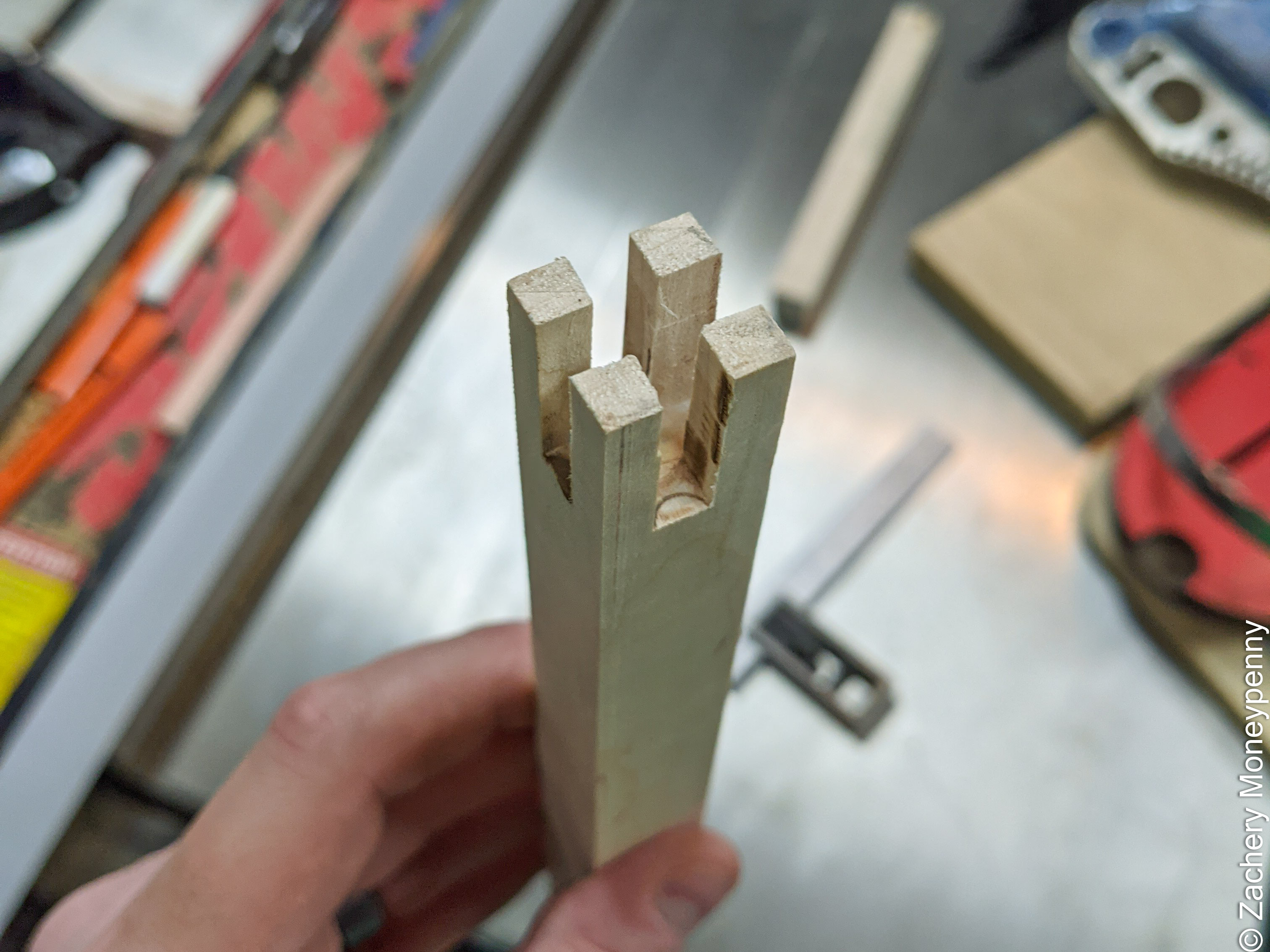 The boxes are now assembled and finished with some Watco exterior wood sealer. Once my wife wraps and decorates them I’ll update with more pictures of the finished product!

I do need to get to regular posting again, but the flow of project ideas in and completed projects out of the shop have not waned as the pandemic continues to spike higher and higher. I do value this time with the family and in the shop, and try to use my time working on projects to create a calm center.

Happy Thanksgiving to everyone out there!

I’ve been wanting a CNC setup for awhile now, but I’ve held off for two reasons: cost and space. Cost is something I could reasonably overcome, in time, but there is simply nowhere left in my shop for a CNC with even a modest footprint. However, in the spring a bunch of YouTube makers published videos exploring the Shaper Origin and I became very interested.

The idea is a handheld CNC that uses computer vision to map and maintain the machine’s orientation with respect to the workpiece. I had a bunch of upcoming projects where it would complement perfectly, so I convinced my wife to let me spend the money to pick one up.

I’ve now had it for several weeks and have to say I love it with very few resignations. Thus far I’ve mostly been cutting cleat projects for my french cleat wall. It’s nice to get acquainted not only with how the tool works, but also the design side of the process too (see below for more on that).

Maybe I’ll put together a more comprehensive review post in the future, but for now I’m still putting it through the paces. Once I have a few more reps with it on hardwoods I think I’ll have a more complete set of thoughts, as until now I’ve used it almost exclusively on plywood.

In conjunction with starting using the Shaper, I’ve bit the bullet and expanded my Adobe subscription from the Photography plan to the full Creative Cloud plan. They had an upgrade sale that gave me the full suite for $29/mo for the first year so I jumped at it. I primarily wanted Illustrator (I already use Photoshop and Lightroom to manage my DSLR workflow) to do SVG-based designs for the Shaper.

It’s been a few weeks with Illustrator and I’m definitely learning! I’ve designed a few of the cleat projects I’m testing the Shaper on in the shop, and I’m even thinking about uploading a few of them to Shaper Hub, where users can open source their designs for other users to download and use.

Example SVG that can be imported to the Shaper. This is a cell phone holder to hang on a french cleat.

For my mother-in-law’s birthday my wife and I planned on making a medium-sized charcuterie board. Now that I have the Shaper, though, I thought it would be neat to whip up a design to carve into the surface. I went back and forth between cutting negative shapes out of a light wood to fit in the groove, or using a tinted epoxy to fill it. Ended up going with the epoxy because I was running out of time, and it did turn out great! 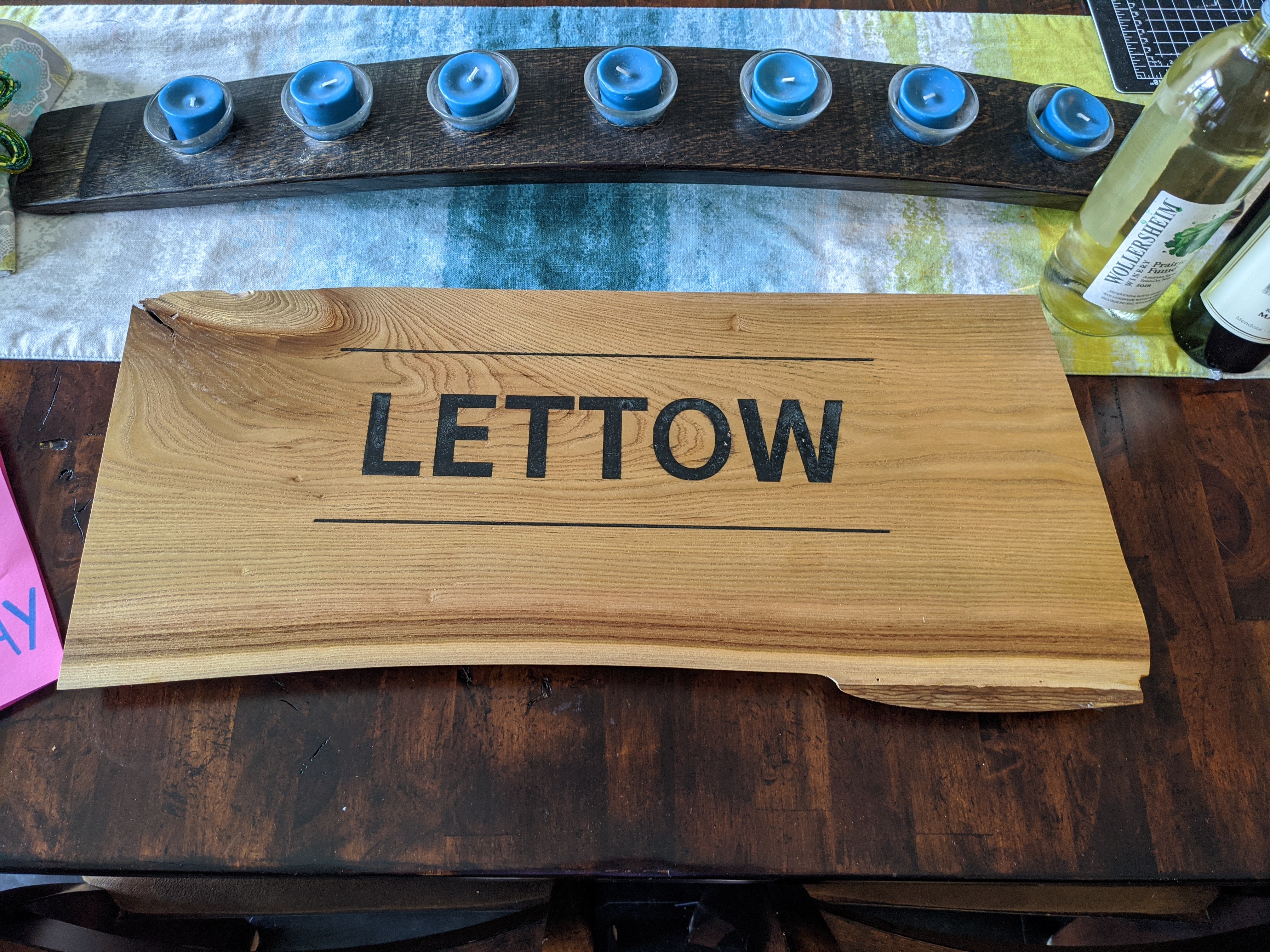 Charcuterie board with epoxy-filled engraving

Since I received the Shaper I’ve stalled a bit on the chairs, but I was making hot progress before that. They’re definitely past halfway, and I really just need to knuckle down and finish the build so that I can move on to sanding and finish. There’s a chance these damn things can be done before the end of summer and I’ll actually be able to sit in one!

Front leg joinery on the Adirondack chairs is now done.

I’ve cleared out my backlog of household projects and gifts for neighbors. I’m on to working through the joinery on the Greene & Greene Adirondack Chairs that I abandoned more than a year ago. I’d abandoned them because at the time I realized that I didn’t have the workholding ability I required to do the shaping of the arms and legs. Now that the workbench is complete with two great vise options, however, I’m full speed ahead. 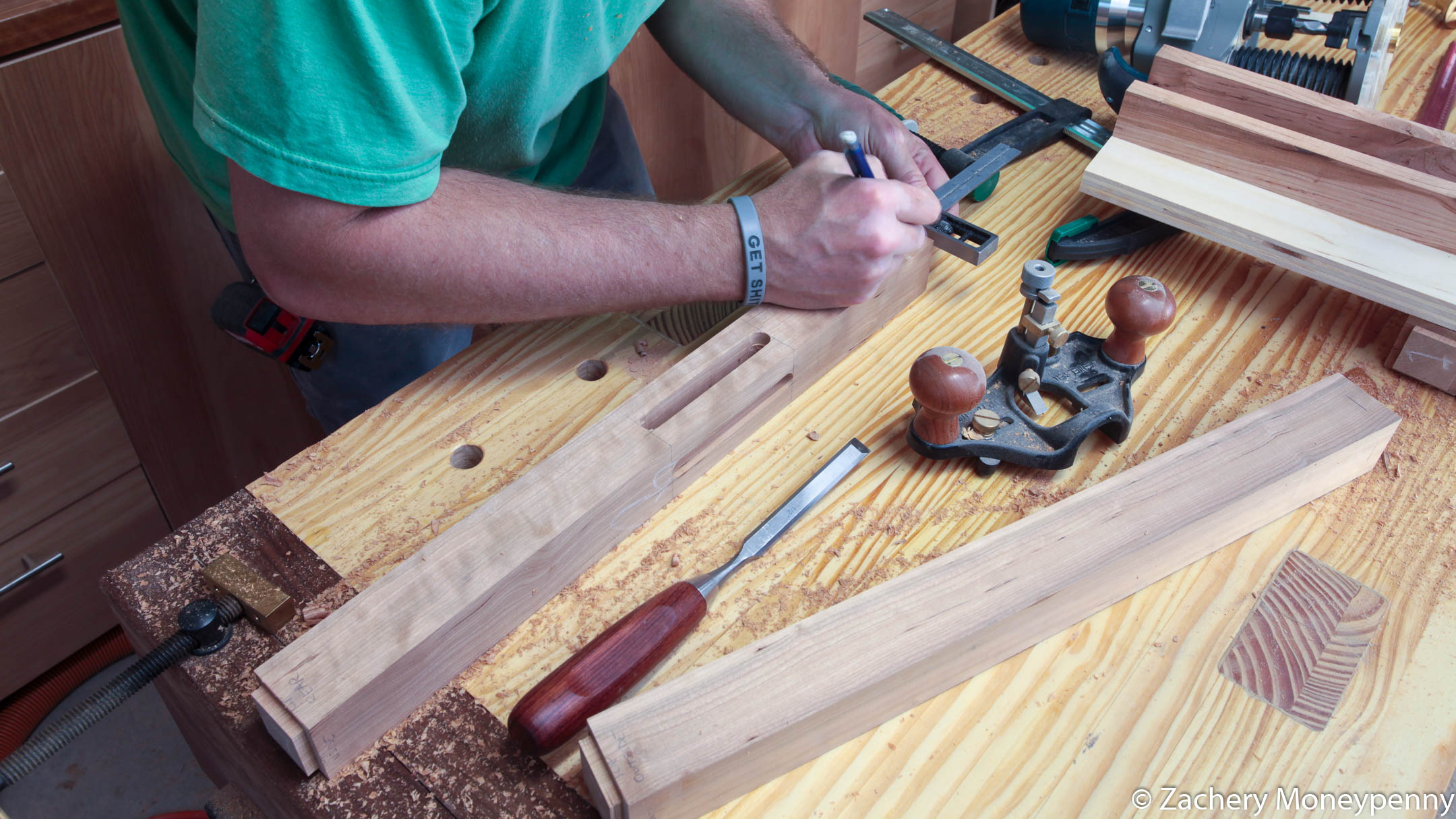 Marking the mortises and leg details on the front legs

I’m working my way through the lessons in the online class on this project, and thus far I have the mortises cut in the front legs as well as the G&G leg details routed in. I also MASKED UP and went over to Woodcraft for the first time since February and picked up a piece of ebony to use for the plugs in the chair.

We’re hitting the busiest part of summer so I’m not even getting time every single weekend to devote time, but I hope to have these chairs completed before the end of summer.

Catching up on the Honey Do list and debut of the Sewing Box project.

Quick round-up on some goings-on around the house! It’s been about 3 1/2 years since we moved into our house and it’s been nearly that long since we power-washed the rock retaining walls in the front and back. I borrowed the neighbor’s power washer this morning and set about getting myself all wet.

It was worth it, though. Check out the difference in that header picture! Left is clean, right is the dirty.

Also (♬ trumpets tooting 🎶) I’ve published the project page for the sewing box! I’ve been using this thing for the past few weeks and it’s been a fantastic addition to my sewing area!

Ok, that’s all. Just a quick update on some stuff but now I have to go out to Menard’s and buy an interior door to replace one that broke ok byeeeeeeeeeeee.

I haven’t posted a blog in awhile, but I have been active on the site! I felt bad that I hadn’t kept up on my project pages even while zooming ahead and completing project after project during the covid-19 quarantine, so for the last few weeks I’ve been focused on building project detail pages for all the stuff I’ve done since February.

First up was the Woodworking Workbench, which was a long-time plan that finally came to fruition this spring.

Next I documented a weekend project to make small floating shelves for our bathrooms. I liked this one because it went from idea to installation in just about three days and nothing to purchase except the floating shelf hardware.

Finally, I just posted my first Sewing project: a men’s short-sleeve button-up shirt. This was so satisfying to complete, and got me real excited to make some more custom clothing.

I’ll have a larger project description of the Sewing Box I recently finished.

I'm also currently working on a pair of sweatpants that I'm eager to finish once I get the supplies I was missing (drawstring, waistband elastic and eyelets).