The flourescent lights in my shop burned out. What’re we gonna do?!

In the summer of 2017 I had my shop rewired by an electrician to add many more 120V outlets along with a few 240V ones for the presumed upgrades I was going to make.

The new lights were a huge improvement in the shop, though! Now, however, we’re six months on and almost all of them have burned out. And one thing you should know about me is that if I can upgrade something to save money in the long term then I’ll always take that road.

So let’s talk about flourescent versus LED shop lights. I considered going LED last summer when I bought the lights but was talked off that ledge by the electrician. He counseled that LED was still too expensive and that a T8 flourescent fixture would be better. When I made that decision, however, I didn’t think I’d only get 6 months out of a set of eight bulbs. A set of compatible LED replacment tubes has an “expected life” of 36,000 hours, which means less climbing up on a ladder to replace them (and what you need to know about me is that I’m a lazy man.)

So easy! Let’s simply rewire our light fixtures and then pop in the new LED tubes! The main car bay will still be lighted like a back-alley but the shop will be bright and happy and I didn’t need to be able to see where I parked the lawnmower anyways!

I have a better idea for the long term.

I’ve been following April Wilkerson’s wood and metal shop build with interest via YouTube and Instagram and she recently had a video about installing the walls and ceiling, with a small aspect about the overhead lighting. The main thing that interested me was the light fixtures she was using: Big Ass Lights Garage Light.

I really like the look and profile of that light, but it’s too expensive for me to swap out everything in my garage right now. My goal in the medium term is to swap in one Big Ass Light above my most often-used work area and move the LED tube fixture over to the car bay, then eventually buy a second Big Ass Light for the shop side and move the other LED tube fixture over to the car bay as well. At that point everything in the garage would be 5000K LEDs and I think I’d be in pretty good shape!

…a few days pass, during which I actually follow-through with the above plan…

Oh god ohnononono. This was much harder than it needed to be. I have lots that I learned doing this. PLEASE SIR OR MADAM HEED MY WARNINGS.

Ok, good news first: I now have only LED tube lights in the shop bay of my garage. If that statement sounds carefully parsed, then you’re really good at reading into statements! Congratulations!

I pulled down one of the fixtures, and after watching the above YouTube video again I disassembled it and cut the wires apart, re-hooking them back up while bypassing the ballast. I then inserted the Phillips Instantfit LED tubes and cautiously plugged everything back in. 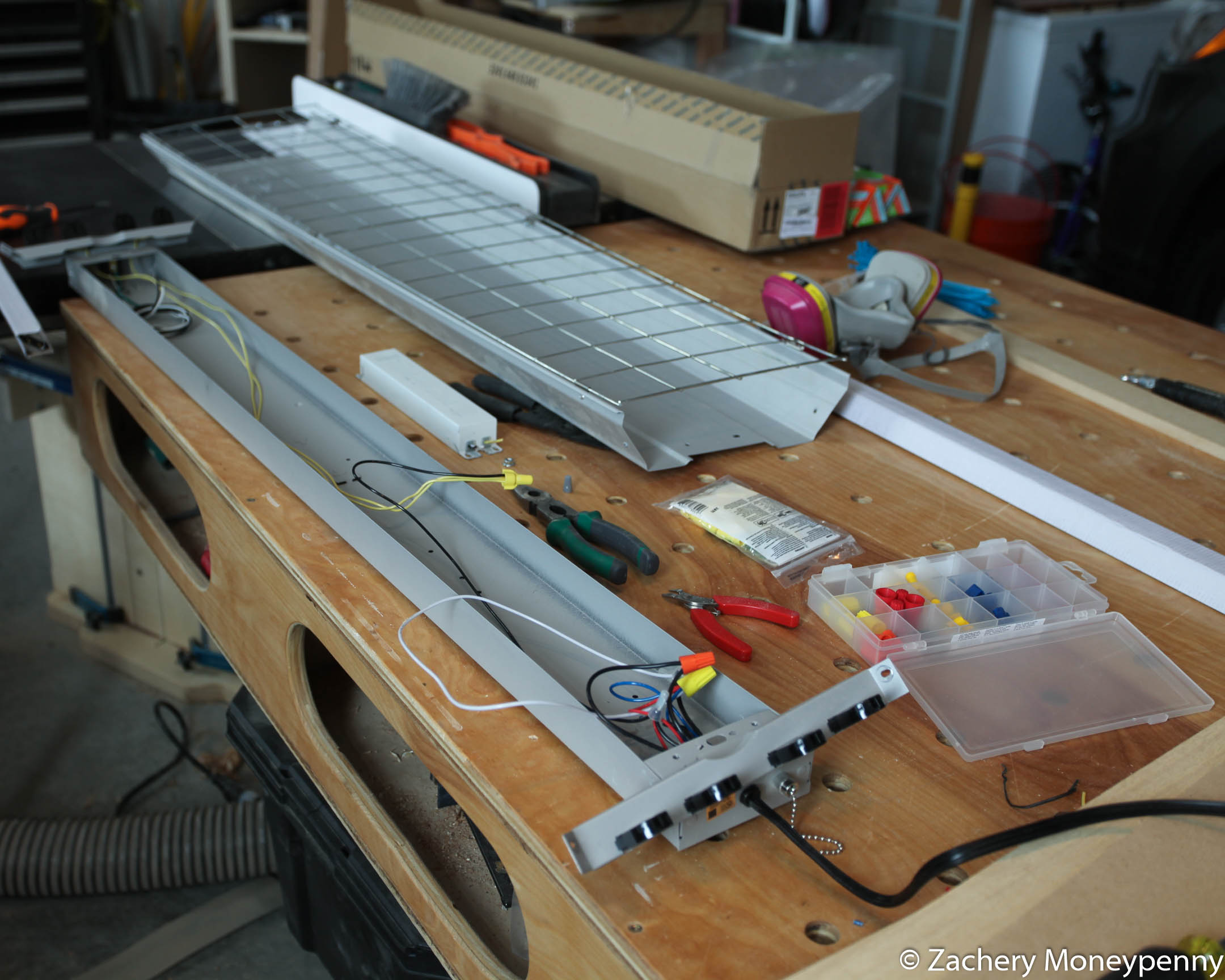 I’ll skip the hours of swearing and rewiring and get right to my first lesson of the day: Phillips Instantfit LED tubes will not work when you bypass the ballast; they are meant to be used in UNCHANGED flourescent fixtures. Unfortunately, by the time I figured this out, I’d already torn apart the inside of one of my fixtures and the way I cut the wires… uh, I wouldn’t be re-hooking up the ballast. 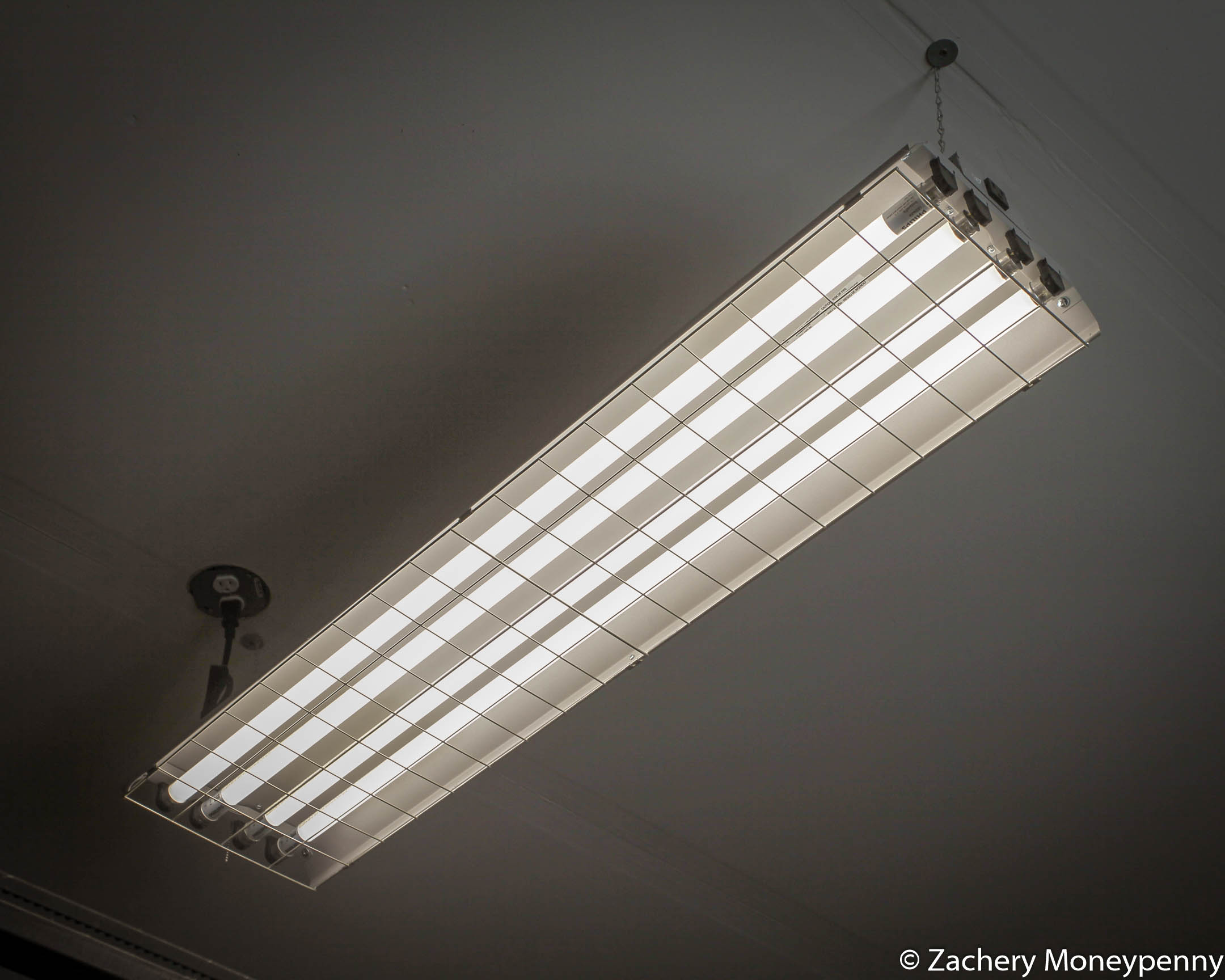 So, as is often the case when I’m working on something I’ve never worked on before: to Home Depot we go!

There, I found toggled LED tubes specifically made for bypassing a ballast in an existing fixture. They were a bit more expensive, but I was reasonably sure they’d work in the fixture I’d already rewired.

Once home, however, I realized that these tubes required even a different wiring than I’d already done, so time to break out the wirecutters again and rewire again. Luckily, the instructions that came with each tube were helpful and instructive, and I was able to get things wired up pretty quickly. They still weren’t working, however, until I realized that these tubes must be installed in a certain direction or they won’t work. Once I turned them around: voila!

I’m gonna throw this section in even though this isn’t technically a “project” post. As frustrated as I got with this, I really learned a lot about the different options in converting from flourescent to LED.

The main thing you need to consider is why you’re converting:

I also learned that I should go buy some extra spools of 18awg wire of all colors to have when I’m working on rewiring shit like this. I got stuck at a few points because I was forced to re-use wires I’d cut out of the fixture.

And that’s it! I have light in my shop again; hope this helped you folks thinking about converting over yourselves.